This guide gives an overview of Display Conduits and how to use them to access Rhino's display pipeline.

Rhino lets you define your own display conduits, which provide access to many levels of the display pipeline. They are a bit tricky. This guide cover the concepts and basics of using display conduits.

The DisplayPipeline in Rhino is a big and complicated class and we do not recommend you derive your own pipeline. Instead, we’ve exposed something called a conduit for easy access. The pipeline itself is structured like this (except in reality there are many more channels):

At one end is the Rhino model, a collection of 3D geometry and data. At the other end is the image we want to display on the screen, a collection of 2D pixels. To get from model to image, the pipeline has to process a lot of information. These steps have been put into channels. When you implement a new conduit, you have to implement at least one of these channels, like so:

Note that the pipeline itself is not bound to the channels. It just executes its code and raises events during specific phases of drawing. During the drawing of a single frame the events are raised in the following order. You hook into the pipeline by extending DisplayConduit and overriding the event handlers that have the same name as the pipeline events:

You hook into the pipeline by extending DisplayConduit and overriding the key event handlers which have the same name as the pipeline events.

In the above image, the conduit overrode two event handlers; CalculateBoundingBox and PostDrawObjects. In RhinoCommon this conduit would look like:

By default, conduits are not enabled but it is easily done by setting the Enabled property of the DisplayConduit to true:

Once our conduit is constructed and enabled, the overriden methods will be called whenever the Rhino pipeline raises the event for which our overridden method is registered. In our case, this method will always be called once with the CalculateBoundingBox and the PostDrawObjects events have been raised (the events have the same name as the overridden methods). Here’s a simple example:

The code above simply draws a single point at the world origin. Since a point is 3D geometry, it is subject to z-depth clipping. This means that if the point resides outside the z-buffer region, it will not be visible (it will get clipped). By default, the clipping planes are set up to encompass the bounding box of the entire Rhino model. If you are drawing stuff which is potentially outside this box, you should override CalculateBoundingBox to make sure your objects are not clipped.

Let’s take a look at a more complex drawing routine:

This piece of code draws a colored, c-plane axis system on top of all objects. Because we disable DepthWriting and Testing before drawing my points and arrows, my objects are not obscured by the existing geometry (which was drawn in a channel previous to PostDrawObjects): 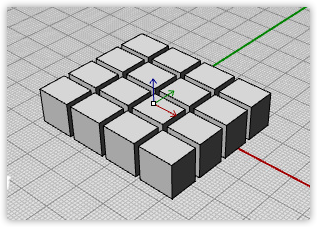 Another thing to realize is that there can be many other active conduits present as well. There is no way of telling which one will be called first. It is important to consider how your display conduits will interact with other conduits potentially called within the pipeline by other developers. Do not write display conduit code that intentionally disrupts other conduits.