Node in Code from Python.

It is possible to call a Grasshopper component from inside a Python script.

Node-in-Code™: almost every Grasshopper component is now callable as a function in other places in Rhino. Grasshopper components may be called in GhPython (on the Gh canvas) and from rhino.Python (off the canvas). This adds few thousand new functions accessible to GhPython. Functions are also available through 3rd party components. Along with the new functionality that this provides, the technique can be used to simplify existing gh definition files by simply lumping together a bunch of related components into a single ‘scott_davidson’ script.

There is a module in ghpythonlib.components which attempts to make every component available in Python in the form of an easy to call function.

Components As functions from GhPython

Use a GhPython component with these inputs:

Enter this code into the GhPython component:

Of course you can mix in other Python to perform calculations on the results of the component function calls. I tweaked the above example to find the curve generated from Voronoi that has the largest area.

Remember, this can be done for almost every component in Grasshopper (including every installed add-on component.) I use the term almost because there are cases where the function call doesn’t make sense. These cases are for things like Kangaroo or timers where the state of the component is important between iterations. Fortunately this is pretty rare.

There are a few techniques that can make working with ghpythonlib.components easier. It is quite helpful and simplifies the code greatly if the proper Type Hint is set on the Input of the Python component. Setting the Type Hint to a specific data type will give the script direct access to the objects. Without the Type Hint a lot more data checking and conversion may be necessary. For instance in a case where points are expected as input, set Type Hint > Point3D. This assures the GhPython components passes in actual point objects to Python. This is especially important for any inputs expecting geometry objects.

Inputs may also are still optional and can be left off the end. Arguments left out will use their built in defaults:

Inputs may also be passed as Keyword arguments (**kwargs). In this way options do not need to be assigned sequentially and certain optional inputs can be skipped:

Help for details of specific Keyword Arguments names can be found in the help tab at the bottom the the GhPython editor while editing the arguments: 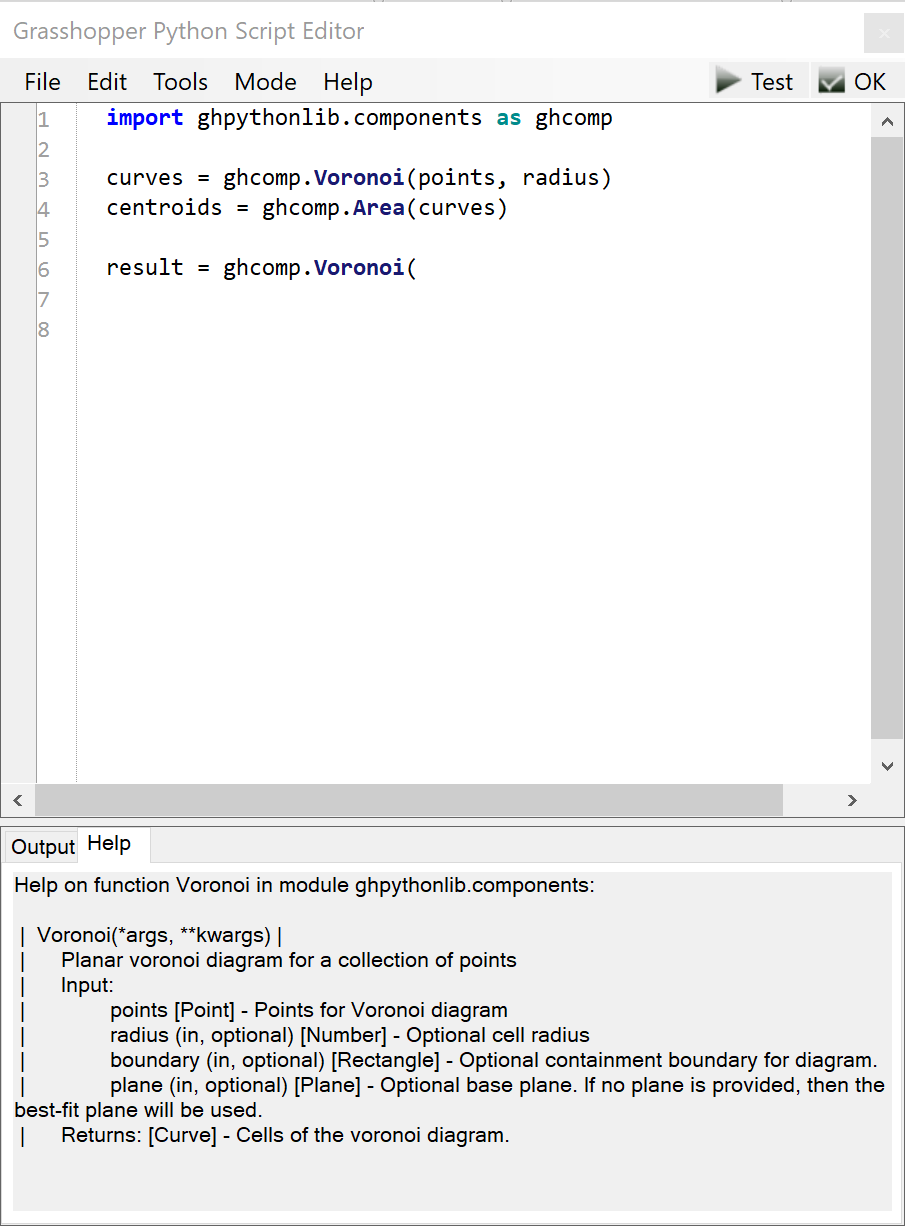 Components with multiple outputs will pass back a list or results corresponding to the sequential order of outputs for the component. Outputs come out of ghpythonlib.components as sequential lists of lists. In the case of (Points, Tangent Vectors, Parameters(t))

A nice Python trick can be used to separate the output into separate lists for each output return values:

Now each variable contains an already separate list of values that can be used in subsequent functions in the script.

Node in code from rhino.Python

As an example her is a script that calls into Grasshopper to use the Voronoi component to create voronoi cells around a few selected points.

The key is the ghpythonlib modules are available in the standard Python editor in Rhino. Behind the scenes things are running through Grasshopper code, but you don’t have to use a canvas to do your work.

This also lets you work in a slightly different way where you can get points in Rhino using rhinoscriptsyntax “get input” type functions and pass those points (or curves or breps) into the Grasshopper component code. 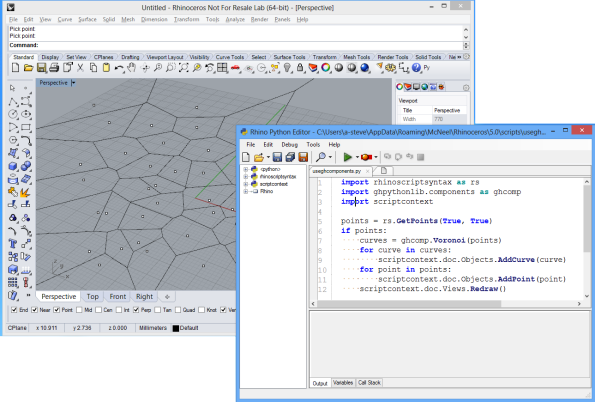 This opens up many more methods which are available to rhino.Python. Remember, this can be done for almost every component in Grasshopper (including every installed add-on component.) I use the term almost because there are cases where the function call doesn’t make sense. These cases are for things like Kangaroo or timers where the state of the component is important between iterations. Fortunately this is pretty rare.

Help for specific component arguments and return values can be found in the help tab at the bottom the the rhino.Python editor while editing the arguments.