We’ve already been using tuples and lists in examples and I’ve always told you not to worry about it. Those days are officially over. Now is the time to panic. Perhaps it’s best if we just get the obvious stuff out of the way first:

Tuples, Lists and Dictionaries are just a collection of things!

That’s really all there is to it. Sometimes -in fact quite often- you want to store a large or unknown amount of things. You could of course declare 15,000 different variables by hand but that is generally considered to be bad practice. Remember, Tuples, Lists and Dictionaries always start counting at zero, while us humans are normally used to start counting at one. Try it by counting the number of fingers on your right hand. Chances are you are someone who has just counted to five. Code would disagree with you, it would only have counted to four: 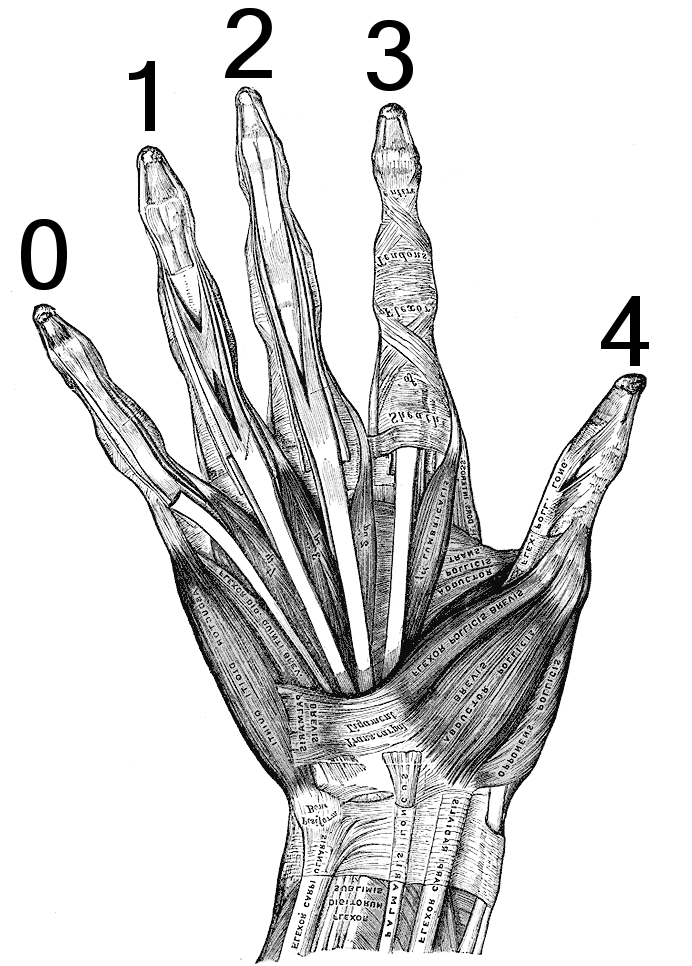 A tuple consists of a number of values separated by commas, for instance:

Tuples can be used for coordinates (x,y) or any other time you need to store various elements. Tuples may contain multiple variables, nested Tuples, Lists or other objects. If you remember from section 4.5, Tuples are immutable, meaning that they cannot be changed! (Refer to section 4.5 on Mutability) That means that we cannot create a Tuple then remove an element, instead we need to create an entirely new Tuple that contains the desired change. A number of RhinoscriptSyntax methods return tuples rather than lists for their simplicity. When utilizing the RhinoscriptSyntax methods make sure to be particularly careful with the input and return types (numbers, strings, tuples, lists etc) and understand how to pass or use each of them. This is a common source of errors in people’s code, so pay special attention to read the methods found in the RhinoscriptSyntax help file!

Lists are just like Tuples, however they can be changed (mutable), they use brackets rather than parenthesis and have far more powerful built-in functionality! Lists can be added to, items can be removed, they can be sorted, sliced apart, nested with multiple levels of inner lists and packed with other objects. Lists are very powerful!

Lists also can be sliced by using the following syntax:

Similar to the range() function, the syntax for slicing list[start:end] - begins with the index of “start” (from the 0th element) and finishes at 1 less than the index “end.” To create a copy of a list we can also use a similar syntax:

Some useful methods for lists:

List comprehensions are a way of utilizing the functionality of Lists and For…Loops with very concise syntax. The list comprehension begins with an expression then has a For…Loop - effectively executing the expression for the number of times specified in the For…Loop. This will create a List with the resultant values from the expression. For example:

The following example should teach you almost all there is to know about lists, except nesting:

Dictionaries go one step further than lists because they store a “key” and an associated value. Every dictionary contains a series of key : value associations. This is very similar to actual word-based dictionaries that contain words and their associated definition. Python Dictionaries can use any immutable type for the “key”, such as; strings, numbers, Tuples (they can only contain strings, numbers or tuples and NOT lists). The value can be any mutable or immutable item that will become associated to the key (this includes, lists or other dictionaries). Lets see an example:

Because of the associated Key:Value relationship, Dictionaries are great for representing points and giving them an associated name based on the points relationship to their neighbors. Let’s say we have a surface and we want to extract points across the surface with rows and columns. Each point has a 3D point coordinate [x,y,z] which is represented as a list who’s first element 0 corresponds to x, element 1 corresponds to y and element 2 corresponds to z. If we wanted to store these points we have 2 options. We could create a list with internal lists that contain the point coordinates (one long linear organization of points) or we could use a Dictionary to add point coordinates as values and have a Key that is a name in relation to its Row/Column position. The second option then allows us to take any point on the surface and know its 4, 8 or however many neighbors because they are named accordingly. The first option would only allow us to know the neighbor direction in front or behind it in line. We will get into this more later, but this should wet your appetite for the exciting potential of lists and dictionaries for geometric information!

As was just explained, points are represented by lists containing three values - [x,y,z]. This notation is used for both points and vectors. First, a point example:

The variable arrPoint is declared as an empty list, the elements are assigned different values on lines 7 to 9 inside the body of the loop. On line 10 the list is printed and on line 11 it is used as the point coordinates to create a 3D point in space.

Vectors are indistinguishable from points. That is, they are both lists of three numbers so there’s absolutely no way of telling whether a certain list represents a point or a vector. There is a practical difference though; points are absolute, vectors are relative. When we treat a list of three doubles as a point it represents a certain coordinate in space, when we treat it as a vector it represents a certain direction. You see, a vector is an arrow in space which always starts at the world origin (0.0, 0.0, 0.0) and ends at the specified coordinate.

The picture on the right shows two vector definitions; a purple and a blue one. The blue one happens to have all positive components while the purple one has only negative components. Both vectors have a different direction and a different length. When I say vectors are relative, I mean that they only indicate the difference between the start and end points of the arrow, i.e. vectors are not actual geometrical entities, they are only information! The blue vector could represent the tangent direction of the black curve at parameter {t}. If we also know the point value of the curve at parameter {t}, we know what the tangent of the curve looks like; we know where in space the tangent belongs. The vector itself does not contain this information; the orange and the blue vector are identical in every respect.

The addition of vector definitions in IronPython is accompanied by a whole group of point/vector related methods which perform the basic operations of ‘vector mathematics’. Addition, subtraction, multiplication, dot and cross products, so on and so forth. The table on the following page is meant as a reference table, do not waste your time memorizing it.

I will be using standard mathematical notation:

IronPython has no method for displaying vectors, which is a pity since this would be very useful for visual feedback. I shall define a function here called AddVector() which we will use in examples to come. The function must be able to take two arguments; one vector definition and a point definition. If the point array is not defined the vector will be drawn starting at the world origin.

There’s nothing to it. A list (or tuple or dictionary for that matter) becomes nested when it is stored inside another list The VectorField example on the previous page deals with a list of points (a list of lists, each with three doubles). The image on the right is a visualization of such a structure. The left most column represents the base list, the one containing all coordinates. It can be any size you like, there’s no limit to the amount of points you can store in a single list. Every element of this base list is a standard Rhino point. In the case of point-lists all the nested lists are three elements long, but this is not a requisite, you can store anything you want in a list.

Len() can be used to get the length of a list. In this case we are saying that arrLastPoint equals the last element in the list called arrPoints because we have given it the numeric value that is the length of the list. This shows how to extract entire nested lists. Assuming the illustration on this page represents arrPoints, arrSeventhPoint will be identical to [0.3, -1.5, 4.9]. If we want to access individual coordinates directly we can use another bracket to explode out the z value:

The above code will store the third element of the nested list stored in the seventh element of the base list in dblSeventhPointHeight. This corresponds with the orange block.

Nested lists can be parsed using nested loops like so:

Remember the scaling script from before? We’re now going to take curve-length adjustment to the next level using nested lists. The logic of this script will be the same, but the algorithm for shortening a curve will be replaced with the following one (the illustration shows the first eight iterations of the algorithm):

Every control-point or ‘vertex’ of the original curve (except the ones at the end) will be averaged with its neighbors in order to smooth the curve. With every iteration the curve will become shorter and we will abort as soon a certain threshold length has been reached. The curve can never become shorter than the distance between the first and last control-point, so we need to make sure our goals are actually feasible before we start a potentially endless loop. Note that the algorithm is approximating, it may not be endless but it could still take a long time to complete. We will not support closed or periodic curves.

We’re going to put the vector math bit in a separate function. This function will compute the {vM} vector given the control points {pN-1; p; pN+1} and a smoothing factor {s}. Since this function is not designed to fail, we will not be adding any error checking, if the thing crashes we’ll have to fix the bug. Instead of using variable naming conventions, I’ll use the same codes as in the diagram:

We’ll also put the entire curve-smoothing algorithm in a separate function. Since it’s fairly hard to adjust existing objects in Rhino, we’ll be adding a new curve and deleting the existing one:

The top-level subroutine doesn’t contain anything you’re not already familiar with:

Tuples, Lists and Dictionaries are very powerful in Python. Let’s make a quick stop to learn about class syntax.