How can Grasshopper use Yak to make your life easier?

For starters, this is less of a developer guide and more of a description of how this feature works, so that you, the developer, can better understand how your package and plug-in needs to be set up in order to leverage it.

It can be frustrating to open a Grasshopper definition only to find that the required plug-ins aren’t installed on the system. Yak can help by streamlining the process of satisfying those dependencies.

Yak hooks into the “Unrecognized Objects” dialog and presents the user with a new “Install” option.

Yak uses the name and version of the “libraries” (plug-ins) to which the missing components belong to search the server. If any packages match the search query then they will be installed and made available the next time Grasshopper loads.

In case the package name doesn’t match1 the plug-in name (as defined in the GH_AssemblyInfo derived class), Yak will fall back to searching by plug-in ID. 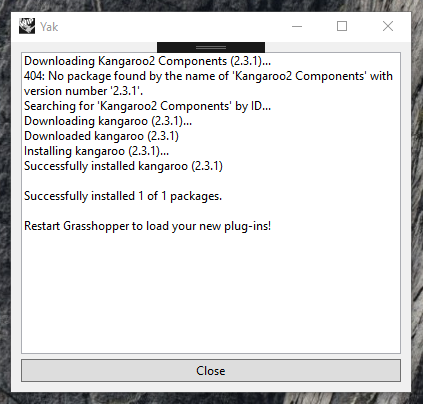 The plug-in ID (GUID) is extracted from the .gha assembly when you run yak build and added to manifest.yml. When the package is pushed, the server extracts the ID (along with the name, version, etc.) and makes it searchable. This is to say, if you don’t want to change the name of your Grasshopper plug-in to conform with the constraints1, please make sure you build the package using yak build so this can all work happily!

Similar to the naming, the Yak server is strict in its use of Semantic Versioning2 for packages. The server will however attempt to coerce version strings that don’t exactly match the specification, for example: 1 -> 1.0.0. If the “Unrecognized Objects” dialog kicks up a plug-in that doesn’t match Semantic Versioning (and can’t be coerced), then it won’t find any matches.

That said, you won’t be able to upload a package without adopting Semantic Versioning, so…